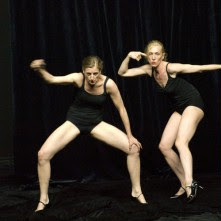 Two aging female dancer/choreographers (Monnier- French, La Ribot- Spanish) from very different discourses collaborate to make a dance commentary and ironic cabaret on womanness performed, much like NZ's biped productions presentation of 'Fishnet' in 2006. So back to gender and sexuality as 'cultural politics' performed in a classically western/european deconstructionist entertainment style. How can I resist reviewing this show? It's right up my alley so to speak and I've been doing this stuff for years. So this is unashamedly for me I guess... (personal is always political and vice versa in my opinion) and for anyone in NZ interested in differently located performative perspectives via this reviewing website. As it's now crystal clear to me that we are located so specifically inside a cultural/performance context and make work to and for this, pretty much alone. Curated by performance theorist Andre Lepecki this year's 'In Transit' ('best') dance festival in Berlin invited 'Gustavia' to present at Haus der Kulturen der Welt as part of its tour.

Gustavia is the main city of a fancy island off the coast of France called St Barthelemy. Your guess is as good as mine but I like it. Metaphorically the title speaks volumes about tourism, land, isolation, romanticism, elitism, origin. But I really wouldn't know. I'm from a paradise island too, which as we know ain't always paradise.

Before I left NZ I'd been told 'French women use their sexuality to claim power back off men'. Having done a B.A in women's studies back in the dirty 90s I thought this was a pretty crack up statement, yeah women's one and only power is sexuality got it. Don't get me started coz it's a quagmire and I thought that strain of thought died peacefully in the 90s (I jest). It's 2009, nearly 2010 and these things remain complex. But so ok, what is it about French women eh? And mediterrean women for that matter. Just to generalise our precious lives away. Anyway.. so I'd been warned it was boring by some, amazing by others and I was curious, having loved Lyne Pringle and Kilda Northcott's 'Fishnet' so much. I want to know how these 2 women will do it differently.

And they do. Because their cultures are markedly different from NZ and so remarkably unisolated in its use of deconstruction as a tool for performance work. Whereas in NZ it is used sparingly, here it defines the work. The humour never ceases. You know they are fiercely serious about the ridiculousness of gendered performativity. It therefore makes me question, who is the audience- in every case? You would never see this in NZ work.

These women are incredible performers. They have a fierceness of face, intensity and highly trained muscularity which makes them almost look like men as they age. Their bodies are still highly agile and limbs extremely long. They enter the stage wearing black leotards and take their place at the microphone. For 20 minutes they take turns whimpering and sobbing from the silence after trying to saying something unsuccessfully into the microphone and tripping on the carpet in their high heels to replace each other. The clowniness of their performance becomes clearer and clearer as they increasingly try to out do and undercut each other with feminine posedness. All of this is executed with unflinching seriousness and intensity which illicits increased mirth from the audience.

Each section they perform has a clear beginning and end and each idea introduced is repeated in that postmodern performance art way (that only Mark Harvey seems to do in NZ) which both exhausts and transforms the action/task and idea they are futily performing. It is very clown. The power games played out are classic sidekick and star roles.. (grumpy/happy clown) with one walking around confused while the other walks about purposefully and meaninglessly with a plank to bash the other on the head repeatedly as they turn. It seems to speak of unconsciousness and the repetition of patterns and mindless habits women play out within femininity, without change.

The main strategies employed are repetition and satire. The clown must be highly serious for the humour to work. The strongest part for me is the ending. Both women stand on chairs and blurt out over the top of each other (in english) every 'type of woman' which is so humourous and layered it goes beyond other sections with its density and becomes poetic. The freedom of this section and claiming of womenness in its complexity retrieves power back from the futility of sexualised womenness in the former sections. Again this is something which interests me personally, using the strength of female intelligence to have fun with stereotypical roles for women. It is fierce, it is powerful in both simplicity and complexity and it is funny.

The only problem with rendering something culturally performed down into nothing is what are you then left with? Always the deconstructionist way. What I saw was two very strong, talented, beautiful, intelligent, powerful women from some of the most privilged (colonial) countries in the world almost mercilessly discarding feminity only to say that one can only be strong if one is never vulnerable. I saw no vulnerability in these women, no earth womanness from 'Fishnet', no softness. It was cold, it was hard. It was simplistic even. And I guess this was the point. Were they Euro women claiming back the power? I've no idea. The irony is that they were performing to and for such a specific audience the concept of deconstructed performance.

It did make me consider though the cultural context of performance with great interest. Where there was room for softness, complexity, ephemerality, humour, power and vulnerability in the NZ work (of the same subject matter) 'Fishnet' and a freedom which comes from having no audience, this performance of gendered subjectivity relied heavily on well used deconstructive conventions straight from the intellect only, highly trained performers and really less heart in my opinion. If that is not too harsh to say because they make up for it in passion and intensity.

And this is very easy for me to judge of course, Europe feels like a cold place compared with NZ. People's vulnerability lies buried far beneath the surface. If you show emotion you really are weak so you better get on with it. And strut. That is the cultural veneer of this place and probably especially for women. It is therefore a land of very strong women, this is womanness. There's no pathos here! And the strength of sensuality is a given.

Getting the picture? I want to make no judgement or comment of what is good or bad here btw, it is just very different. NZ work is often quite cathartic or atleast emotive and women are by no means meant to be vulnerable. But the modes of performance communication reflect the culture and thinking around the art form. And performers perform to that culture, unconsciously or not. They speak with and reflect it. An audience so educated as in Europe can handle so much satire and deconstruction. It is actually normal, perhaps even unconscious? Very different from NZ. Where deconstruction is used in some choreographers work more than others, but when it is it really really does want to mean something. And is often balanced by something rather ernest.

Unless I missed the irony of 'Gustavia', which is entirely possibly, and they were also satirising the strong woman. But I didn't think so. Maybe they didn't actually know themselves. Sounds like from the talk they gave, that they agreed on nothing, which usually creates an interesting dynamic if nothing else. Some thought it made them cancel each other out but I thought some interesting things were performed and communicated. Go collaboration.

Obviously from the festival's title (Resistance of the object) it was pretty clear they were resisting or atleast playing with the ever objectified and narcissistic female/dancer body/being. As we know this is always a minefield and no easy task. Use and abuse the stereotypes? Hats off ladies, hats off. You got me thinking.

Posted by Alexa Wilson at 4:46 AM No comments: