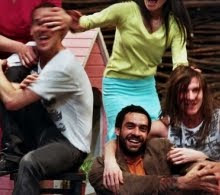 I have long wanted to see Meg Stuart's work, having only read about it online from NZ and knowing it would be a combination of state-based improvisational strategies for emotional expression as well as powerful and transformative social commentary. Concerned that my expectations would be too high, the work 'Do animals cry?' fully exceeded my expectations of being the finest european dance theatre of the day.

So dance has long since been the 'new theatre' in Europe. What Artaud coined a 'theatre of cruelty' long ago has found itself institutionalised inside Meg Stuart's dance theatre, which is a theatre of explosive and evocative imagery rather than words. It is a theatre of the body and of all politics surrounding the body, beginning here in this work with the institution of the family, which is also inclusive of human beings as a wider family. It is a commentary on humans as animals who are at once social, communal, dysfunctional, incestuous, always prone to power play inside desire to possess rather than love. A family which can never part, but cannot quite love each other either.

Although the cast is very european dance theatre in its cross-cultural make-up, ranging from american, japanese and german to english/polish the flavour is distinctly american, which is what Meg Stuart is. 'Dysfunctional family' is not original as a concept and U.S independent film does it best. Turning tragedy into alchemic comedy and spitting it back out into tragedy again just to churn the emotions of the viewer. Stuart does this without a story or even many words, as the most poignant aspects of social dysfuntion can be evoked by body language alone.

The work is over 2 hours long. While this may seem long to most, it is bursting at the seams with a crafted mastery of contact duets, trios and solos, which while most would not call 'dance' in the traditional sense, embody an incredible fragmented subtlety and charged schizophrenic tension inherent in the conflicted family member's relationship to family.

Hat's off to both the performers and the choreographer, who together make room for each dancer to explode on stage while heightening their oppression, by feeling what they need to feel in order to deliver such authentic performances, which few productions can muster. Genuine feeling and individuality on stage is a rarity in dance performance created by one choreographer's vision and shows extreme skill to be able to create access to and harness such depth in performers.

The set by Doris Dziersk is larger than life to be expected, a large tunnel of branches, which acts as an off stage and also sometimes lit inside as a vehicle for transformation, semi-circles a dog house and a kitchen table. At the front of the stage is a drum kit. All action erupts from or evades these objects in their symbolic significance. The music by Hahn Rowe is uniquely folky. Rarely overpowering (except for one solo by a rubbery dancer breaking out totally OTT club styles and a crazy woman's drumming) it goes with the all american set- half country, have dreamy, half film epic and accentuates the journey which is half satire, but mostly serious.

While each inventive vignette often builds in tension either in violence, teasing or power struggles there is much rejection and abandonment, with many characters being left uncomforted, doing something anti-social alone while the other's continue socialising. And while there is much expression of individuality via powerfully electric solos of sinuous articulation or state changes which are beautifully grotesque in their pleasure at their own subversiveness, there is plenty of return to sitting bound to each other in silence. There are many long uncomfortable silences, hence the 2 hours. The family/community tolerates each other even if they do not really function together as a unit. There are a lot of attempts to speak turned grotesque by intense stuttering or repetition, which is powerful as well as humorous.

With words stripped out, attention is drawn to the group behaviour as if it is an animal documentary, mostly subtle but sometimes made more obvious when exaggerated- like with the return of one of the family- the excitement of all is half dog-like. Many references are made to dogs, with most of the characters ending up in the set's dog house at some point. They toss sticks to each other and seeing as dogs are loyal, the sticks are of course returned.

Gender relations are subtly corroded. Role reversal sees a strident woman try to actively seduce her inactive boyfriend before being nearly seduced by a more interested male party. However the boyfriend who gets between them seduces the male, leaving the female dejected. Always sexually charged, the work explores the complex dynamics of human power relations, often with the result of emptiness, complacency or lonliness. Only once is someone actually comforted in their pain. No genuine love seems to exist, hence the isolation. The impotent or emasculated patriarch, who never seems to get a solo but is teased and never really respected has a very telling presence in this role. The individual pain of all the strong performers and their alchemical attempts to break free of oppression is strongly felt.

The only person unaffected by the torment seems to be the character who has left the family and come back (Alexander Jenkins). He is the most empowered, calmly and vibrantly filling the stage with hope. His presence seems to tranform the entire stage.

What is so moving and amazing about this work is the simultaneous complexity and simplicity of it. The concept is simple and the intricacy of craft is brilliant, with inventive and playful layers ephemerally shifting in and out of each other, whether they're humorous or confronting. Each performer is inside their body in truthful ways, sometimes subtle, sometimes violent, always powerful and ever more truthful as the work goes on. What is transformative about it is the honesty of the work and the commitment of the performers. I imagine this as testament to a choreographer with a lot of integrity and compassion.I find these qualities quite rare in larger works as a whole. I've also discovered via this work that integrity is more important than the quest for originality. Infact integrity makes originality.