Dance in Berlin/Europe vs Dance in New Zealand 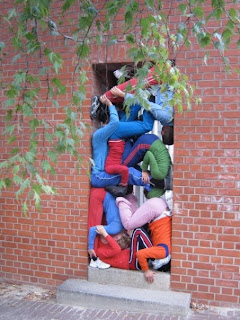 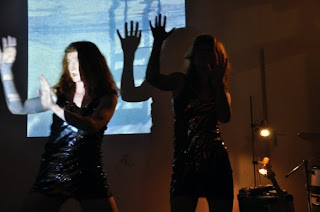 It is difficult to generalise or even distinguish what is 'Berlin' dance as the way that European dance works in general is very intercultural and international, caused by such close borders and an increasing globalisation of the arts market. This breaks down boundaries between cultures and nations, where they call themselves the EU with now only one currency. Berlin is a very poor but creative city, recovering from the cultural and financial integration of East and West Germany 20 years ago when the wall came down. Dancers and choreographers need to travel outside Berlin to survive, providing they can actually even get into the scene.

New Zealand, on the other hand is a small and remote 'paradise island' in the south pacific which has a cross-cultural milieu symptomatic of being colonised and residing in the Asia Pacific region. As a 'nation' it is no older than 200 years and most of its problems centre around race/cultural relations, environmentalism, land ownership (privately and commercially- who actually even owns NZ?) and identity.

Much like NZ, dance in Europe is governed by festivals and funding, but work tours across Europe not just within one country. It is a global network. There is however a divide between the local scene which is poorer and the internationally touring scene. I have been to 2 festivals in Berlin, 'In Transit' in July and 'Tanz im August' and attended one in Vienna, 'Impuls Tanz'. I have also attended independent shows which are largely governed by venues around Berlin- Hau, Sophiensaele, Radial System, Podewil, Doc 11, Tanz Fabrik.

The first noticable difference between dance presented in Berlin/Europe and that in NZ mid 2009 is that in Europe as a whole the attachment to modernist dance form is long gone. Progressiveness, experimentation, deconstruction, theatricality, irony, interdisciplinarity, performativity, concept; these are being explored across all levels, from the canon choreographers Meg Stuart and Sasha Waltz down to independent emerging choreographers in the experimental venues of Berlin. Even from the simplistic but very ironic older female deconstruction of 'womanness' in Mathilde Monnier and La Ribot's 'Gustavia' during 'In Transit' to the lively, culturally and theatrically overabundant collaboration with Turkish youths of Neukölln, Berlin work of Constanza Macras' 'Hell on Earth'- traditional dance form is in the dust.

Compare this with NZ dance. While Michael Parmenter and Black Grace have made attempts to move in conceptual and cross-disciplinary directions in the last year, as the most well supported practitioners of dance in NZ, their work is still form based. Anyone who has worked for them and is making work also tends to still explore technique and traditional contemporary dance form choreographically. Even Douglas Wright's work, which is more conceptually and emotionally adjacent to the work in Europe is also very virtuosic compared with most of the work here.

However, the more FRINGE work being explored in NZ is like what most of the work in Europe and Berlin is exploring currently. Everyone in Europe is trying something different, looking to find the next new thing. They're knawing at the confines of dance to discover new ways of expressing, exploring and communicating via the moving body, interdisciplinary performativity, somatic investigation and improvisation. There is of course also a lot of derivative, passe work as well, which I have seen.

There are many things at play and conflicting in both dance cultures. While I have seen works of scale here, especially at 'Impuls Tanz', apart from Wim Vandekeybus' electric and athletically organic recent work, "nieuwZwart" (new black)", where the dancers almost broke their bones to achieve virtuosic beauty- mostly naked- and Jan Fabre's very provocative and theatrical 'Orgy of Intolerance,' where a man put a rifle up in his anus and many people masturbated on stage, I have not seen the kind of edge that there can be in some NZ works. There is an open mindedness in European dance, a sense of 'anything goes', and 'we will do and try anything', but it is often detached, often cold. There is a lot of nudity on stage, but it doesn't seem to reflect any genuine sense of power or vulnerability, apart from some rare exceptions.

Whereas there is a sense in NZ of open heartedness or atleast choreographers exploring the depth of their own interests because they want to, scrutinising their own identity and personal politics within the wider world. I think that this takes more risk and is more connected to or grounded in a purpose beyond dance as either an entertainment form or platform to distinguishedly and elitistly present 'avant guarde art'. All this makes me question- where is dance going?

And while NZ dance may have the liberty to explore its own curiosities far from any real pressure to be the next best thing across the world (and very few NZ choreographers get the inroad to present their work in Europe) it suffers from having little input form-wise. The ideas explored in works in Berlin and Europe may not be original and deconstruction and irony is really old news here, but this has forced them back into investigating the truth of the body. They're all about deconstructing what movement and presence really is. Hence there is a lot of state based work.

Benoit Lacambre whom I did a workshop with and who performed at 'Impuls Tanz' and 'Tanz im August', a leader in somatic improvisation, creates an electric and alive performativity from his investigations, a dynamic exploration of dance which is totally embodied and very intense, if not violent. It is about presence.

The use of text is massive in Europe, and In Berlin I attended a free work in progress by Ezster Salaman during 'Tanz im August'. She was taking text to the next level, working on a solo with Christina Rizzo which explored liminal spaces in text- that was halfway language- grunting, half singing, hysterical, throwaway, and gesture which naturally came with it inside a range of constantly shifting states. It reminded me a little of the work of Brent Harris in NZ but it was female. This work had no dance in it and was the most surprising thing I have seen yet. I saw another performance art influenced dance work in a small gallery called Okidoki in Neukölln in which a woman, Biljana Bosnjakowich, lay on the floor and invited people to sit around her as she linked and unlinked their hands across her naked body, which was in a circle grid like Leonardo Da Vinci's image of man's measured body, also measuring their faces with her own hands. Layering (of states), gentleness and subtlety is on the rise. But then violence is also ever present still in larger works, along with some explorations of 'failure' on stage.

They have it all here, and are unashamed. But heart, it seems, is ever veiled. This is not surprising as they've seen much hardship here in the past 100 years alone. Perhaps it makes the work more complex, along with of course a well fuelled history of intellectual discourse. This has its strengths and weaknesses, just as being isolated and open hearted in the pacific also does. These are all generalisations of course and there are many exceptions which I hope are embedded in this text. I get the sense that there is a lot of a ingenuine posturing on stage across the world, after all it IS performance. As soon as something becomes a trend too in my opinion, it has lost its authenticity. Whether you think authenticity is important is completely subjective of course.

As I have said, the Fringe dance culture in NZ more accurately parallels what is happening here in Berlin and Europe, which I already knew before I left NZ. I believe NZ dance is a well kept secret in some ways, unable to penetrate the international scene due to isolation and finances. Some people in NZ are making new dance, but it is not necessarily always supported so much by institutions. There are many paradoxes, but NZ and Europe are very different, if not opposite, places socio-culturally, both still pushing the artform of contemporary dance in interesting ways compared with many other places in the world.