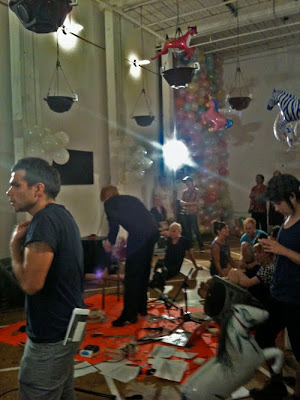 As I enter the building an old naked man in womens’ make-up stands at the top of the stairs leading to the theatre. He is saggy and creviced, a confrontational image of everything about the body that society passionately seeks to avoid. I won't pretend that initially I am shocked and caught off guard by the honesty of this, but given the nature of the work I am about to see, I assume that he is part of the cast placed intentionally amongst audience members to help jolt us out of the normality of our lives - or perhaps for any other reason - maybe just for fun. I give the man a warm hello, which he receives gratefully and politely, and then I take my place in the long line for tickets. I soon see however that he is standing a few people behind me waiting in line to be ticketed just as I am. This not only reminds me that I am in New York, but also sets the tone for an event that has already, without even trying to, immediately confused the traditional boundary between audience and performer.

The venue that Naked Man and I are lining up outside of is Issue Project Room, located on the third floor of the Old American Can Factory in Gowanus, Brooklyn. It is a long white rectangular venue with no ‘stage’ area as such, meaning that the performance takes place amongst and with the audience. Upon entering the space, which has been decorated with huge bunches of balloons and blow-up animals, we all circle ourselves around an orange square in the middle of the room, which has on it, among other random objects, a laptop, some papers with notes on them, a microphone and stands, water bottles, food, and what seems like beads or gems scattered around. The style is colourful, kitschy and primitive, as though we have entered the earnest pages of a young girl’s scrap-book. There is a woman standing at the end of the room overly primped in a blue hooped princess dress, white gloves, thick garish make-up and a blonde wig topped off with a small sparkling tiara. Beside her are two male assistants in black suits, pink bow-ties and wigs, and a soundman in a bloody-stained blue lycra dress stands by the mixing desk near the middle. When everyone is in, the woman makes her grand entrance to the middle of the room on roller-skates, floating toward her fantasy.

The woman on wheels is none other than controversial, provocative and prolific New York based performance artist Ann Liv Young, a young woman who since graduating from Hollins University’s prestigious dance programme has fast become a leader in her field. At only 29 years of age Young has performed her distinctive works at some of the world’s most leading festivals and venues including P.S 1 Contemporary Art Center, Brooklyn Museum, The Kitchen, Dance Theater Workshop, P.S 122, Judson Church, Impulstanz, Tanz Im August, Springdance, and Laban Centre London, among others. Having only had the chance to follow the woman’s prowess via her online presence (which is quite extensive by the way), my anticipation is running high. What will I see tonight in this sickly-sweet room? Will I see boobies? Will I see people having sex? Will someone even try and have sex with me maybe?

Starring in Young's one-woman fairy tale reinterpretation is her own alter-ego “Sherry”, an aggressive and persuasive southern wildcat who in turn plays the character of Cinderella, a poor young maid whose parents are dead and whose evil step-sisters control her meaningless life. Essentially there are three women performing tonight, each one bouncing in and out of the aggressive and the demure, an interplay that manages to investigate female archetypes and stereotypes without boring you to death with serious feminism. The juxtaposition of a socially provocative character (Sherry) inside a strangely sweet and child-like veneer (Cinderella) is a subtly tense yet playful dynamic that among other things, enables the audience to maintain curiosity.

Existential ‘Dear Diary’ monologues that Cinderella softly recites into the microphone as she sits in front of her laptop provide a simple thread through the first part of the performance. These personal and almost shy offerings are spliced and contrasted with her trademark use of pop songs, which she leaves her computer to dance and rap/sing along to with conviction and a truthful attempt to get the words and pitch correct. Her two suited assistants in pink bow-ties and wigs provide flamboyant back-up dancing with flashing fame style moves. High kicks, turns, and pirouettes never looked so funny, must have been the wigs. A favourite moment is Young’s powerful and hilarious rendition of T.I’s Whatever You Like, which she manages to re-contextualize with a Riot Grrrl attack on the microphone.

It is a simple structure that unfolds. Young performs a song or monologue, and then addresses the audience with questions, after which she returns to her computer to recite a monologue again. It soon becomes apparent that it is not the actual singing and dancing and 'performing' that is the 'performance', but rather everything else that happens in-between it. She gets on the mic and asks us how we are, what we think of the performance, if we have any questions or comments. The young intellectual Brooklyn audience is keen to participate, giving responses that Young steers the show with by cleverly throwing it all back in our faces. The issue of relationships and being in love comes up at some point, which then becomes the over-arching theme of the rest of the discussion, paralleling the story of Cinderella. Young spots a man alone leaning against the wall, whose name is later revealed to be Jacob. She interrogates him about his relationship history, which he reveals to be almost non-existent. She proceeds to ask him very personal questions and the air becomes awkward and tense. She takes him outside to ask him further personal questions, which she then shares with the audience when they return. “Jacob hasn’t had sex since 2003" she says, embarassing him as anyone naturally would be in this situation, and it seems as though he is on the brink of tears, crushed like a young child who learns that their favourite storybook character is not real.

Young’s behaviour seems a little unfair to me at this point, and to me it is though she has crossed a certain line. I feel compassion for Jacob and a hint of resentment towards Young, a resentment that probably comes from the same place as the anger that has lead people to physically attack her in previous performances. I sit there petrified at the possibility that I may be the next victim of her terrifyingly direct questioning. But as the evening progresses, my resentment transforms into complete awe as I come to understand her embarrassing provocations as cleverly crafted acts of healing.

After performing another song, Young lifts her dress up, pulls down her stockings, and squats on top of a bowl announcing that she is going to poo into it (she also happens to be eating something at the same time I might add). She sits there pushing, asking us to look away whilst she performs this act, but then asking us to gather around closer to her, which she suggests might actually help her push the poo out as it proves difficult to do. Stage fright perhaps. She asks us for advice as to what might help her shit which, by the way, she innocently refers to as "doo doo." Someone hands her a cigarette, the soundman opens a coke for her to drink, a friend from the audience even gets up and sticks two fingers up her arsehole in an attempt to douche it out. Nothing works though, so we sit back down and she changes the subject.

What was supposed to be approximately a one hour performance turns into a 3 and a half hour ritual. It emerges as an open forum discussion, where Young in fact recognizes that people may receive her as a controlling protagonist that uses the misfortunes of other people to create entertainment. We sit on the floor huddled around her like primary school kids, listening intently to the mistress share her glittering story. She addresses Jacob again, who throughout the evening has become the star of the show in a way, perhaps identified by Young as someone who was looking for some help in the first place? Maybe not though, who knows. She actually ends up making out with him, and then after this, repeatedly asks him if he wants her to give him a blowjob, maybe to show him what he really wants, maybe to just do it. Ironically, Cinderella has found her prince, but it is she who saves him in this instance, a clever twist and maybe an accurate reflection of the power that women do actually have over men. There is no clear ending to the show and we are all finding it hard to leave, partly because as audience members we aren't given an obvious "THE END" cue which we are all so used to. The curtain to this fairytale never drops, and we are forced to enter back into the worlds we came from with a lingering sense of "FOREVER AND EVER." Young asks us, "Why haven't you all left yet?" And we all kind of look at each other with "Who the hell knows, I just can't!" expressions on our faces.

Just over 24 hours have past and I haven’t been able to get Ann Liv Young/Sherry/Cinderella - or the chain of events that she provided the conditions for - out of my head. To me she is a sharmanistic provocateur disguised behind the annoying aggressive feminist stereotype, perhaps a completely selfless act to come off as the bad guy whilst all the while undertaking the work of a modern-day spiritual doctor. Ann Liv Young can simultaneously create excrutiating discomfort, unusually profound enlightenment, humour and grief. Exposing people to their own potential, to their true identities and to what is stopping them, Ann Liv Young is an inspiration to those of us performers who want to transform our audience. Behind the candy-dipped facade of an old story she is simply seeking for honesty I think, in her own performance delivery and in her community, because if we are honest with ourselves, and are honest about ourselves in the presence of others, can we perhaps heal and let go of that which brings us misery and holds us back from our potential? I feel privileged to have witnessed Ann Liv Young’s idiosyncratic take on the fairytale of Cinderella, and to be making work and viewing dance at a time when she is around is, simply, inspiring.

And as for Naked Man, a personal thank you to you my friend for owning your body, your identity, and your true desires. May you shine on like the crazy diamond you are, and may you continue to lead the path for those of us who have become afraid.