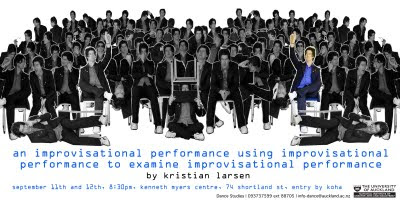 A conversation between Rosemary Martin and Cat Ruka
Cat: The other night Kristian Larsen performed a solo improvisational dance/text piece at the Kenneth Myers Centre as part of his Masters research in Dance. You know how blockbuster movie trailers all have that same voice-over narration guy on them and he always says in that really gruff hyper-yank voice, "One MAN, one DESIRE"...that was going round in my head whilst I was getting seated. Kristian. Alone. With a niggling problem....And enough bravery to want to solve it.

Rose: It was good dancing in my books. Despite the fact that at times there was more talking than dancing, this only made the moving part all the more interesting, leaving you wanting to see more of the improvisational movement business that Kristian so clearly articulates. I enjoy good dancing, thinking dancing, intelligent dancing; dancing that has the ability to move you to consider things from a new perspective, that creates an imprint on you as an audience member, or that can just make you laugh, in a good way.

Cat: Yes it was good dancing, effortless dancing, dancing that didn't apologize for being there or being clear. And speaking of laughter, there was this one moment when Kristian sort of shed himself, he was talking about something mundane-ish...and he just sort of cracked up at himself and shattered the performer ego and it just lifted the mood, along with the illusory distance traditionally set between audience and performer. From then on we were all in it together. I suspect that this might be hard to do, to minimize that distance, to create intimacy like that, particularly in an improvised setting where we're all waiting for the guy to drown anyway...which of course he didn't. Not once.

Rose: It was apparent that it was Kristian's intention to interweave and frame movement within spoken text, something he achieves with ease, providing a running commentary, strewn with humor, of the intentions, processes, notions or narratives pertinent to his concept of improvisation and performance. Clearly the influences Kristian speaks of – Paxton, Forsythe, Hawkins, Ralston – emerge through his movements which are refined yet real, set to a score of breath and impromptu lighting cues.

Cat: Refined yet real is definitely the crux of this performance I would believe, and the crux of his investigation into improvisation too. How hard is it to show good technique without being a wanker right? Without losing oneself in the process? And you know I said to Kristian after the show that for some reason I had no desire to tell him how amazing he was or to give him feed back because why would I give someone feedback for just being themselves? You know it was more like I was just having a conversation with Kristian and he just happened to be doing all the talking. Honesty is quite a pleasurable thing to see on stage huh.

Rose: The integration of William Forsythe’s Improvisational Technologies into Kristian's research demonstrates that you don’t have to be in Europe to do this and that it doesn’t make you look like a ballet dancer, rather it just makes you look like you know what you are doing, creating a valuable set of movement tools to draw from.

Cat: LOCATION. I think Kristian said the words 'context' and 'space' quite a few times in the piece, and I do recall a bit of the old 'inscribed', 'written upon', 'agency' etc being in there too. What exactly are we doing when we make 'contemporary' (European) dance in New Zealand? Coz, you know, we're kiwis eh....What is that actually? Are we copy-cats? Are we borrowers? Are we hybridizers? I think Kristian likes to ponder this in his practice. I wonder what Forsythe would say if he saw the piece...

Rose: The most satisfying element of the performance for me though was that Kristian was prepared to acknowledge what so many of us dancers experience and understand; that we dance because of love, for love, in love, around love.

Cat: Yes. And I think that may have possibly been the problem that Kristian wanted to solve actually. In my opionion, Kristian has been investigating or searching out Love and Truth by way of discipline, technology and rigour. I don't think he knew it at the beginning though. And that's quite the beauty of the practice isn't it is that you don't really know what you're doing until you get in there and do it. You know I think the relationship between improvisation and Love could quite possibly be, perhaps, unfathomable?

Rose: Oh, and I really want to see that roll in the top right hand corner of the stage again, it was splendidly breathtaking.