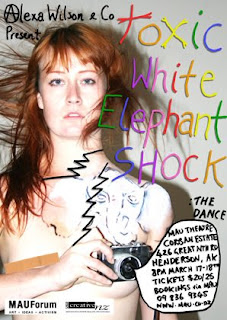 Littered with ironic self reflective critique and biodegradable props, Toxic White Elephant Shock is indeed a dangerous jumble sale overflowing with earnestly vital attitude and a genuine desire to say something.

A series of simultaneous statements, the work constantly accumulates and disintegrates, the molten (yes, hot) performers weave an interdependent web of movement, sound, situation, and riotous theatrics that threatens to overwhelm, barely under control, displaying characteristics of the natural disasters so often referenced in the piece. All performed strongly and deserve credit for their effort, execution and commitment. The group emanated a strong identity which was an invaluable expressive component of the work. I feel this was a desired and intentional part of the works anatomy. Wilson's approach to her work addresses more than it's brief incarnation on stage, she is keenly aware of the wider social and historical contexts of her performances and these are constantly referenced in the work, exhibiting a desire for it to explode from the formalised event and commune with the wider world - starting by literally smashing the fourth wall and demanding audience participation.

Each of the participants (7 women, 1 man) have a distinct identity/look that is maintained throughout the work (excepting Packham's brief incarnation as Alexa Wilson herself). This identity seems to be a ritualised version of themselves. Not a persona, more of an offering - to be burnt in sacrifice, part of a faith healing for society? Their bodies are treated like banners - slogans, attitudes and motions pass through or are spattered over them, a sort of psychophysical action painting. The use of group nudity near the beginning of the piece was very strong, both confrontational and grounding, that particular section generated a lot of atmosphere and opened the door to the rest of the work, an overture of sorts containing all the major concerns of the piece.

More expressive than explorative, Wilson and co have a lot to say. They cram an incredible amount of ideas into a scant hour and a half. Rarely settling for one thing at a time, Wilson uses simultaneity to achieve density. Although her images and staging can be interpreted a number of ways, the actions and intentions of the dancers are sharply defined. Thus simultaneous layering of many strong elements (as opposed to one thing which isn't quite anything exactly but almost many things) is a sensible choice for generating depth. Having seen and been involved in a number of Wilsons works I recognise this tactic and am tempted to think this is an easy choice for her creatively. However this is easily the most complex and large scale work she has tackled and it was satisfying to see her style achieved with assurance and higher than usual production values.

The movement language was a mash up of functional actions, martial arts, wild krumpy urban tribal shit, contemporary softness and, um.. Power Shapes. Naked Power Shapes! Love it. The theatrics and movements are generally affected - this isn't a criticism in itself cos it's mostly very watchable. When the performers are required to be intense they do so either with force of personality or often violent physicality. This certainly has impact, but only for so long. To Wilsons credit she does find a remarkable number of ways to make it work but I feel the law of diminishing returns should be acknowledged: As the piece progressed conceptual and emotional complexity accumulated, but expressive complexity not so much - the same wild aggressive approach was used throughout most of the piece and I felt it began to misfire towards the end. Anyway, what are the other options? would they dilute Alexa's strong style?

The work is cabled with a healthy dose of electronic current. Live video feeds lend the drama of confrontational breaking news, live effected vocals from Brennan saturate the space with murky bestial textures, dance floor killers and soulful odes to the moon. Pre composed sound from both Brennan and Charlotte 90 jousted and slid back and forth to support each of the many many sections of the work. I liked the almost sound clash set up of the musicians; one just offstage to either side, taking turns to fill the invisible spaces of the theatre. Their co operation/collaboration almost seemed to provide an example of the communication and clarity between sexes that was desperately called for by dancer Yee at one point.
Both had notable onstage moments: Charlotte 90's stone cold chorus support for Alexas rap song, and Brennans wild thrashings and wrestlings as Box Head.

Toxic White Elephant Shock has the frenetic energy of a film trailer and an admirable desire to be current and involved with the world. Refusing to retreat into discipline bound obscurity it claws at the boundaries and draws in many energies, all wound into an ecstatic dance of celebration and warning. A truly spiritual effort. Thanks guys.

i just read this again and im like, daaamn, thats a hot review