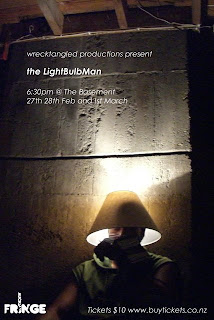 Omg. These guys are amazing. They're fresh, clever, charismatic, funny and talented as hell. There's nothing hotter (in all ways) than a performance work that takes heavy themes, universal and specific, and twists them inside out in an essence of anger and sadness using humour, smartness and pop culture refs to wind it back into a fist of rawness, anger and sadness with an anti-hero wise zen anti-climax fuck you ending. Love it. I don't know shit about comics but I love rap and not only are these guys original and satirical with wordplay so fast you could miss it but they know how to seduce you with good acting and savy streetwise quixotics.

Director and performer Jacob Tamaiparea (LightBulbMan- with a lampshade head) and his multifarious collaborating sidekick Rangi Rangitukunoa who plays friend Zac, evil drug lord boss Shoes, Jose the (puppet) monkey and icon Ice Cube literally bounce off each other in a simple fusion of characters and journeys set around a charity soup kitchen. While LightBulbMan's journey seems simple yet profound, like fucken gotta get outta this shithole working for this shithead, actor Rangitukunoa juxtaposes it with a shapeshifting dance of characters within characters who distract Lightbulb man (maybe all in his head anyway) from leaving the soup kitchen. Hero only to himself really LightbulbMan confuses only himself through fear and within a mixture of rap mixed with live musician beats and rock guitar riffs takes the hip hop musical murder mystery satire to its death by implying that to stay is to die, that his boss Shoes has already killed him spiritually and that the death to leave is a thriller worth waiting for. Salvation and eureka is quitting. The best idea he's ever had.

This genius in its simplicity and realness is clothed by a multitude of sequences framing humourously just how fucked working in both hospitality and the irony of charity in its warped capitalist joke really is. The crack up and beautiful shakespearean poise of Jacob's LightBulbMan mixed with a comically boyish but totally manly confusion vs Rangi's manifold sweet but then terrifyingly maniacal and cackling alteregos was so supremely comic book anti-hero stuff I was cackling like a dick myself in the front row secretly hoping for some audience activity. But I knew that no one else belonged on this stage, so choicely li-fi in its veneer, because these guys had it covered. Their energy was bowl you over material. Dynamic, intense, fun. Light? Hard to say. I like it that way.

ps. I know my brother's puppet monkey is in sweet hands.
Posted by Alexa Wilson at 1:40 AM