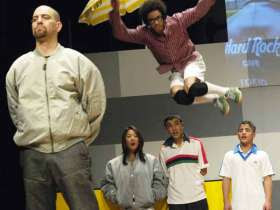 Can I even write this review not understanding most of what was said in the theatrical scenes? My German is so bad. But I dare so. As they also dare create dance theatre on the margins of culture in Berlin in so many respects. So fresh off the plane from NZ I do it in my best Kiwi fashion and 'give it a go'. Coz this show moved me.

Staged at an acclaimed experimental theatre Hau (as old as they come in Europe) in Berlin's Kreuzberg, 'Hell On Earth' is the second incarnation of Argentinian choreographer Constanza Macras' collaboration with youths from one of Berlin's Turkish areas Neukolln. The first was 5 years ago, the young people younger. Now they're teenagers, not only facing a continued history of cultural marginalisation but an adolescence in which gender and sex politics awkwardly and sassily take the stage. What better place for an outlet and expression of so many clashes and liminally intimate interactions between displaced and entirely community based individuals?

With a blend of non professional youths and professional dancers/actors this work interweaves like moving ephemeral street scenes which dissolve, confront, entertain, move, amaze, enlighten, transform, embarrass, celebrate, protest, explode and then dissolve again. The set is idiosyncratic; there's a club (it is set up like a club actually, guarded by a bouncer), a diving board, a shower, plants, balconies..? and the lights are glaring through the whole work. Inside a mesmerising execution of dance with theatre is awkwardly placed video projections which scream volumes about isolation amidst the crowd. We're in the middle of Europe, do people even really notice each other? Cultural and sexual politics are squirming and writhing in the chaos of scenes between groups of sexually charged young Arabic boys and sexually evocative and intelligent young women, of a variety of cultures, claiming their individuality.

While a bouncer guards the stage and keeps a telling eye of the performance goings on- to begin with he blasts a group of young women in dresses with a massive fan, while an incredibly adept (actually flabbergasting) male break/dancer solos in a deconstruction of masculine fragility and strength combined. A group of male breakdancers together do the same thing falling over and over to a retired stasis, while text between people (evidently humourous judging from the response) prods at further adolescent sexual and cultural awkwardness. A striking young South American woman (who speaks alot) running into young boys and knocking them down with her large breasts to their and her horror is apparently drawn from real life, as is the enactment of a flamboyant gay Israeli confronting these youths with his eccentric behaviour.

People ignoring, teasing and provoking each other is highly charged. Young girls fight for the mic to sing their favourite R&B and Amy Winehouse songs while guys show off their best moves. Amidst all the posturing and goading and showing off are the most moving moments of intimacy between couples and individuals. One refuses to be part of masculine competition whereas a young woman shows off in red heels her amazingly sharp breakdance routine. The bouncer and the young South American do an uncomfortable duet which addresses attraction and abuse (within an age gap/paedophilia?), while a female and male breakdancer engage in a similarly awkward and aggressive love duet which goes nowhere. All these deconstructed pop cultural movements and references are so well executed and crafted that genuine moments of vulnerability and intimacy are heightened within and outside them. All performers are impressive. Whether they're speaking, posturing, leaping from balconies, hiding in the corner behind their mates, fooling around, doing beautiful dance solos and duets or just standing their looking lost, they're dynamic and clearly themselves.

At the forefront of this work conceptually is gender politics, real for this community and these people. Women celebrate their ability to move and their sex appeal which is powerful. They also speak a lot and take the piss. Similarly their continued vulnerability is leeked within such moments as a woman videoed running through an underground and being locked in while she is pursued by the bouncer. The camera lingers on her banging her fist on a glass door which is locked and screaming for help.

Anyho. It was pretty choice eh. It was so layered with cool performance art and subtle moments too. And while I don't understand a lot of the language and specific cultural references I can appreciate that the beauty of dance theatre is that in the moment, in so many spatial layers, issues of personal and collective cultural alienation and celebration can be evoked, heightened and transformed like in no other art form. While the work deals with serious themes of prejudice and dislocation it is ironic, humourous, intelligent without falling into rhetoric and most of all expressive. Together these things gave a fullness and richness in both generosity and love for both audience and performers. This community of performance makers and people created an authentic sense of hope and despair, age old themes readdressed in post-colonial, post-modern, urbanised and cynical times in a decolonising (eh Cat?) way. What a breath of fresh air. It was fresh, really truly. And I dunno if like 6 bows is normal in Europe either but the audience wasn't ashamed to express how much they liked it either and I was like, yay I'm in Europe!

http://www.dorkypark.org/ for anyone interested
Posted by Alexa Wilson at 2:05 PM

Awesome, thank you so much Alexa for posting this review and thereby connecting us to Berlin dance, it's so great to hear what's going on over there. Keep going to shows and telling us about them!!!!

Love from Yellingmouth and Cat