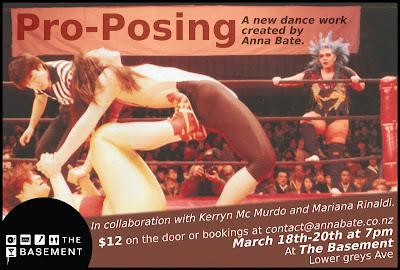 Think glitter, think glitz, think woman as wrestler, as poser, as provocateur, as show pony and as pretty pom pom holder. Blend a streamer landscape with projected image of body builder body and serve it up with exposed stereotypes of restless driven male energy combined with cheerleading females as decorative adornments. In tinsel.

The inner insecure of the world of the 'professional' body-builder is revealed in all its tensile, gripping and somewhat grotesque glory in Anna Bate’s latest work ‘Pro-Posing’, performed at Basement Theatre. Contorted faces, trying to establish control and virility stare wildly at us in the opening scene, with shattered bundles of nerves projected out in eyes and fidgety, anxious body movement. Jerky, awkward, and confrontational positions serve us confusing messages about the validity of masculinity. The tense postulations in the bodies of Kerryn McMurdo, Maraina Rinaldi and choreographer Anna Bate set up a clear structure that guides us through a dance performance event of humour, intrigue, dominance and submission and a myriad of ways to use a conventional glittery pom pom streamer.

In their various 'pro-posed states' of embodied traditional and typical male body-building stances, the women stand as signifiers of a culture which hides in it's protagonists the fear of being seen - to be weak, to be emasculated, to be fearful of one’s opponent. Anna cleverly disguises the threats to one another and to audience 'taking this all too seriously' by featuring the 'cheerleaders pom pom' as a primary device to invoke humour, sensitive treatment of space, and some quirky movement vocabulary devised in a defined series of 'entrapments' for the body. The dexterity in which this unique movement is performed is a characteristic feature of Anna's work and sits well in contrast to the performative 'scenes' she creates in quick succession, giving us the overall impression of a narrative of deconstructed masculinity and a breaking of codes that ‘men only’ can embody this type of representation in satire or genuine embodiment.

Costuming for the piece is simple, and evocative of mood, character and thematic change. The performers seamlessly pursue changes of costume as the scenes develop, and the integration of costume and props into the work is a key feature of the work and delightful to watch.

Pro-posing climaxes in a hilarious 'superstars of wrestling' tussle, in which Anna and Kerryn 'enact' a very skilful and believable 'fight in the ring' - complete with grunts, over the shoulder holds, and slam dunks in to the ground, while Mariana referees the action. Even though a 'victor' emerges, the overall sense we have as audience is one of sadness, and alertness to the dubious quality of masculinity as an aggressive force in the ring. Here, people are dominated but no one really wins. Instead, girls in nude body suits and bright purple pom pom streamers circumnavigate the winning protagonist with a fluid and free, flirty dance which downsizes the impact of the virile wish of the winner.

Dance highlights include a fantastic slapping, circular cardigan dance by Mariana and Kerryn. Through their direct impact with the floor in whipping motions, the two women convey the frustration, superficiality and weakness of the wrestling stereotype and its futility by exacerbating masculine competitiveness and aggression amidst the environment of male one-up manship.

Instead, vulnerabilities and insecurities are exposed, captured in the bodies of female dancers who do a stellar job in embodying the body positions and feeling tone of the hyper-active and hyper-driven testosterone body. The eyes of the women consistently reveal and reflect a moving language of emotional nuance. Coupled with the female display of cheerleading formations and pom pom flurries (sacrine sweet faces included), the performers create a surreal and off-edge world, where the performers appear to be both teetering upon and playing with images that plague and are upheld as 'strong', 'weak', 'beautiful', 'sexy', and 'stripped bare' in a competitive sports culture and in the politics of sexuality.

Fragmented, fidgety and decomposed movement expresses the internal world of the broken wrestler and combine with low level lunges and unusual anatomical placements of those beautiful glittery streamers that made my eyes go all starry amongst the strategically placed lighting. The soundscape by Sally Nicholas and Josh Tilsley oozes a sense of strained inner tension, folding into delicate and super sensitive moments of quiet and reflective commentary in feminine focus as pom pom becomes adornment, ornament, and bunny tail.

I won't give away the power of the fantastic final image and character. Suffice to say, expect a shimmering monster like you’ve never seen before.

Pom pom power to you sisters.