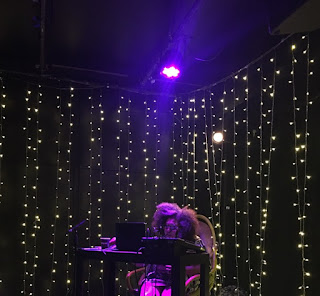 Before I begin, I have to proclaim my uneasiness with the process of writing about creative expression. I hold the belief that any person engaged in the act of reviewing an art work cannot separate themselves from also re-conjuring and re-affirming the critic’s problematic position of power. For a long time, arts communities have scripted the reviewer (or responder, or whatever softening term), into a role of authority in which they are the gatekeeper who has the final hand in constructing and contouring the artistic-cultural scene. Maybe the review writer is a myth maker who - often unconsciously operating from an ego-realm - will etch their myth in stone, and it is these stones that lay down the narrative of what the art WAS and how appreciative the community SHOUD BE of the artist. It’s a whack and archaic practice, and maybe the following writing should have stayed in my journal along with my shopping lists and boring personal confessions. It is my opinion that no matter how much poetry, fragmentation, or buzz words we employ in earnest attempts to deconstruct the act, we can’t escape the dynamic of power inherent in the historical relationship between artist,critic and community. This is a relationship I believe will exist until our secretive and darkened needs to be the best artist in all of the land really, truly dies in favour of a total desire to succeed collectively.

After many showdowns of conflict and comment trolling from privileged old yt people on theatreview, I discontinued writing reviews and removed my rather unfiltered yet minorised voice from critique altogether about 7 years ago. But then on Saturday night I attended Xhrome Xhrysalis curated by Fafswag artist Akáshi Fisiinaua, and was inspired enough to press in to the tension of reviewing again. The following is some personal fiction about partial aspects of this event as experienced through the skin-lens of my brown and marginalised artist body. I also note here that I come to this writing as a collaborator and proud friend of many of the artists involved.

Okay, now we can start.

Interdisciplinary artist and curator of Xhrome Xhrysalis Akashi Fisiinaua seems to move through literal and figurative spaces without fear. I experience her as an ancient and deadly presence, recently storming many facets of the arts scene with a body that chants, dances, ritualises and gives voice to the lived experiences of herself and her burgeoning peers. Whether she’s jamming around with her sisters in Myers Park or MCing a Vogue Ball at Auckland Art Gallery, Akashi is always out to execute to the death. Xhrome Xhrysalis is no exception - here she draws on her taste-maker powers and assembles some of her art family into a confederation of expressions that take over both levels of Auckland city’s Basement Space. Traversing across fashion (Jasper Powell), music (Coco Solid, Fānau Spa, Whaea Queenie, Selecta Rei), digital installation (Tanu Gago, Pati Tyrell, Sione Monu, Jermaine Dean) and performance (Fang, Honey, Duchess, Mistress Supreme, Jaime Waititi, Julian Chote, Rosanna Raymond), Xhrome Xhrysallis is a magical wild card that can never be revisited or replicated.

Upon arrival, I am immediately welcomed in to an environment that - at an energetic level - feels warm and safe enough to express my aroha and receive it. Isn’t this what we all want whānau, I mean lets be honest. It’s the vibe I’m totally accustomed to feeling when I’m around Fafswag and the wider community, but to be brutally honest seldom perhaps never feel at the Basement. I’ve been attending and making shows at this venue for over 15 years and I’ve never until this moment felt culturally and physically safe there, and on this night it’s a massive triumph to be able to walk across the car park and up to the entrance knowing that my people are inside and that it’s possible I may get through the evening without feeling anxious and culturally alienated. Fafswag are an important presence within the realm of theatre for this alone; for the way in which they are able to transform and flatten the coloniality of the theatre space (and all its subtle socio-cultural hierarchies and micro-agressions) into a plane of intersectional queer POC belonging. I also thank those currently involved in programming at the Basement for facilitating this event, who have finally allowed a rupture to occur in the racially superior history of this space. A rupture that is significant enough for brown people to actually, finally, feel at home. 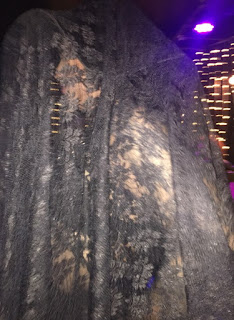 As with most Fafswag offerings, the event is beyond full capacity and we are sandwiched into a delicious body-intimacy as we wait for the doors to open. When they do, me and my mete head up to the studio first and enter into a predominantly digital environment with multiple works being screened at once. It’s dope to see Tanu’s work first, a multi-channel video work on a stack of old TV screens. Tanu’s distinct visual language takes me back to seeing those iconic large-scale portrait prints of his in the original Fresh Gallery Ōtara, and Fafswag’s first Vogue Ball just down the road from that in what feels like a lifetime ago. Tanu’s work is an important marker of time and signifies one of the most disruptive moments in urban pacific art. The bold and staccato messaging in the work is a needle through my third eye and in this moment I am also reminded of the important mahi of Ema Tavola, Leilani Kake, Nicole Lim and many many others whose self-determination in those early days carved an ornate space for the current yung blood to enjoy, protect and critique.

There are no chairs in the space (fucking hallelujah) but rather rostra in each corner that encourage us to establish social nooks through the evening. The fairy lights hanging from ceiling to floor create a softened, galactic ambience within which to feel comfortable and teleported. There’s no sense of rush or spectacle just yet. Selecta Rei (Reina Sutton) occupies one corner behind her sound system in all her mega-glory, kick back on a yellow cane chair and it’s one of the most low-key poignant statements of the night. Headliner and queen of ‘ActiVAtion’ Rosanna Raymond promenades her bare skinned body through the space - stalklike, forceful and entangling. Mother of COVEN and performance artist Mistress Supreme (Moe Laga) is draped in black lace and weaves her way through the crowd with a series of reductionist fucking/birth poses that totally strip everything down to the bone - she is irreverent and subtly transformative. We soak up what has now become a revolutionized space through performance, and after some dancing, hearty elevated discussions and one or two potent rums, the space has filled and we become the audience of a fashion show.

Jasper Powell is a clothing designer with maaaaajor potential. I’ve seen Jasper’s work in previous shows where more muted fabric choices have been made, but in this moment I get my colour-science jollies out of the collection’s bright, unexpected combos and tonal-clash vibrancy. Rich plums, hot pinks, canary yellows and nicoll blues are cleverly assembled into faux fur coats and tassel-trimmed sportswear. I find myself deeply satisfied with the tailoring, the order of garment presentation and the consistent BEHOLD ME BECAUSE I AM A GOD performance energy of Jasper’s models. I also have to admit that it’s just hella pleasurable to see the millennial point of view shared so authentically and unapologetically in a social context that celebrates and laps that shit up. Overall I’m left feeling utterly uplifted and excited to see Jasper’s next move. 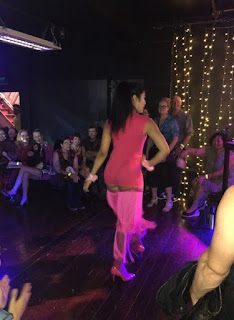 We head back downstairs for a nosey, and on our wandering through the in-between spaces I become aware of the circle of manaaki and service that is being held by a group of quiet and humble background assassins. They are doing everything they can to keep the event at a high vibrational frequency, and ultimately it is this service that ends up ‘glowing’ for me the most throughout the evening. What I love is that they are not there to keep everything under control but rather to respond to and flow with the emerging needs in a way that only our pacific people know how. I notice it on several occasions and find aroha brimming up to my eyeballs for Jermaine, Leo, Elyssia, Tanu, Sione, and Pati. Tonight these are the members of the collective who are not there to receive adoration from culture-consuming fans but rather to keep the walls of the whare upright for their family.

In the main theatre space we are lucky to catch a performance from COVEN member Fang who provocatively opens up territory between Vogue and performance art through ritualising their dancing within the task of unveiling and undressing. I’ve heard Fang is racking up the mean fan-base through Fafswag’s interactive documentary - and it’s no wonder - their performance presence is an intoxicating mix of raging fire and lithe delicacy at once. After rousing the crowd into stupor, Fang is joined by her baby COVEN sister Honey who places the glazed cherry on top in the candy-coated way that only Honey knows how. We break for more drinking and then before the humidity and exhilaration both finally get the better of us and it’s time to go and find an ocean, we catch the beginning of Coco Solid’s set. It’s the perfectly iconic end to our evening and for us, wraps the overall experience in touching nostalgia.

So basically for me, Xhrome Xhrysalis was lit. There’s nothing more to express than utter gratitude. Thank you Akashi, Tanu, the artists, and the entire Fafswag collective, not just for this important moment but for every other moment that has gone before and for the even more epic ones yet to be manifested. Thank you for the sacrifices and tough choices you always make so that the rest of us can breathe, if just for an evening. Thank you for catching multiple buses and trains home late at night from the inner-city venues so the rest of us can witness the striking brilliance of your bodies under colourful lights. Thank you for the Vogue injuries, the notes in your journals that become works, the hustling, the divine and infinite wisdom. I see you. I totally fucking see you. And to those who might have picked this writing up and managed to read to the end. This is nothing more than my own bullshit projected onto words on a page. You don’t have to be special to write a review. 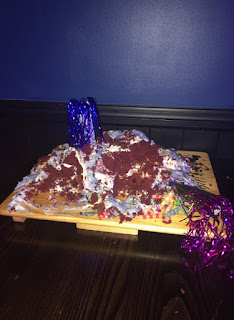